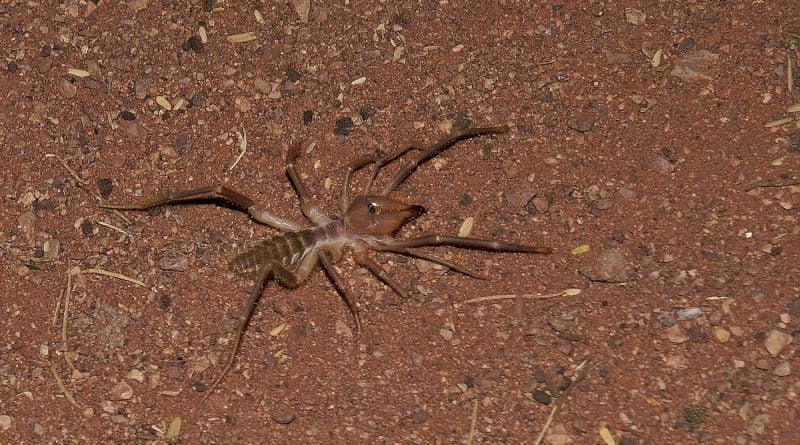 What are Camel Spiders?

Camel Spiders are not spiders, but they’re visually similar to the external anatomy of spiders, hence the name. They are in fact arachnids, also known as wind scorpions, sun spiders, etc. They cannot generate webs and are not poisonous despite popular myths. Camel spiders are a mysterious species, many myths and false facts are going around about them.

Its body is dark brown in color and it has hairs on its body, serving as an insulator from the desert heat. The brown color acts as an instrument aiding in camouflage, helping it to hide or blend with its surroundings. This helps it in staying safe from predators.

They are solitary animals and can never be spotted in pairs except for when it mates. Males are smaller than females and males possess longer legs. They appear to have ten legs, but they only have eight.

This is because their second pair of appendages near the mouth is very long and it is often mistaken as another pair of legs. These appendages contain small, sharp teeth. They are used to catch, tear and cut their prey. 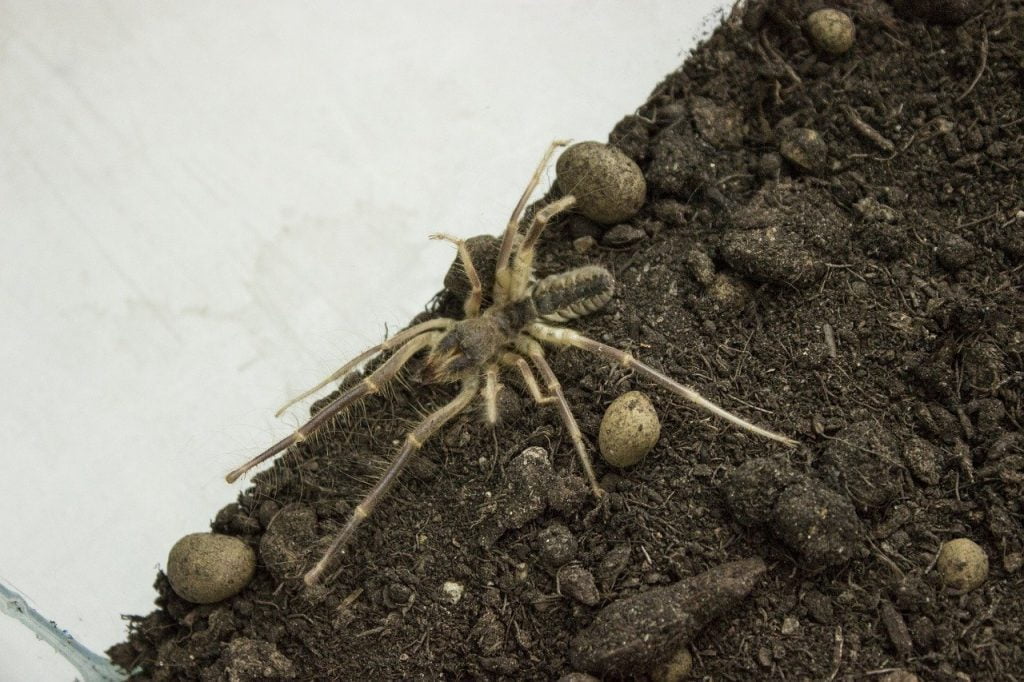 Where are they found?

Camel spiders are desert animals; they prefer to live in hot climates. They are found in semideserts, scrublands, and deserts. They come under the order Solifugae, which in Latin means “ones who flee from the sun”. It could be because Camel Spiders prefer to stay under the shade even though they live in dry and hot areas.

They hide in cracks between rocks to escape from the heat when the daytime temperature starts rising. They usually come out of these crevices to hunt and most probably they hunt at night when it is much cooler.

Since they are shade seekers, Camel spiders are also called ‘solpugids’. They can be seen in Europe, North America, Africa, etc.

There are more than a thousand varieties of Camel Spiders and their appearances can be different according to each variety. But most of them can be about 5-6 inches long, and of terrifying appearance.

They have hairy legs, which adds to their already scary appearance. There have been some very scary stories circulating about these arachnids, but in reality, they’re less dangerous than these stories make them be.

Camel Spiders are said to have gotten their name from the (false) fact that they eat the stomachs of camels. It was in the early 2000s that these scary myths about camel spiders began to spread.

These false facts were stated as if narrated by soldiers stationed in the Middle East, and they were accompanied with what can be seen as a picture of two camel spiders attached to each other, giving an idea that these creatures were extremely violent and dangerous.

The picture shows two camel spiders fighting each other, one of them biting the other’s tail area. The one that’s being bitten is hanging upside down, but the other one doesn’t let go despite having to hold the entire weight of the bitten spider.

They are rumored to be able to attach themselves under camel’s bellies, eat them or lay eggs on their skin. All these camel-related stories must have been instrumental in giving them their name.

It is also said that they got their name with an association to a camel because they can be spotted around camels. This may be due to the fact that they seek shade to escape the hot climate and must’ve been following the camels to use their shades to hide from the sun.

Due to all the stories going around about camel spiders, which are almost indistinguishable from facts, the truth about how their name came to remain unknown.

They can move fast, through the hot desert sand at a speed of 25 miles per hour. Another myth is that they make a loud and screaming sound as they go by.

They are carnivorous, can jump as high as almost 5 – 6 ft. They will chase human beings and they will bite people’s flesh and muscle off, attacking anyone they encounter, leaving voids.

Another story is that the camel spiders are extremely poisonous and their bite is almost fatal. The story says that their venom contains a strong anesthetic that instantly makes their victims fall unconscious. This is when the spiders are said to start feasting on their prey. This story originated from exaggerated stories that spread during the Gulf War.

The troops took pictures of camel spiders and started spreading them. People often think of camel spiders as something that is an object of the nightmare to soldiers, as they are said to eat the flesh of the bodies of sleeping soldiers in the desert.

Many more ridiculous stories go around, generating unwanted and irrational fear of camel spiders in people. One of them is a story about how they will bite people and then lay eggs in the wound. Apparently, a woman got bitten by a camel spider and they hatched in her wound, causing many camel spiders to emerge out of the wound. It sounds horrendous and scary, and very much fabricated.

A false fact that generates horror in people about these creatures is that it is said to be very large in size, almost as big as a frisbee. The photos of camel spiders that circulated in the early 2000s were very instrumental in presenting them as scary. These pictures were most often taken from a close angle, hence the large appearance. 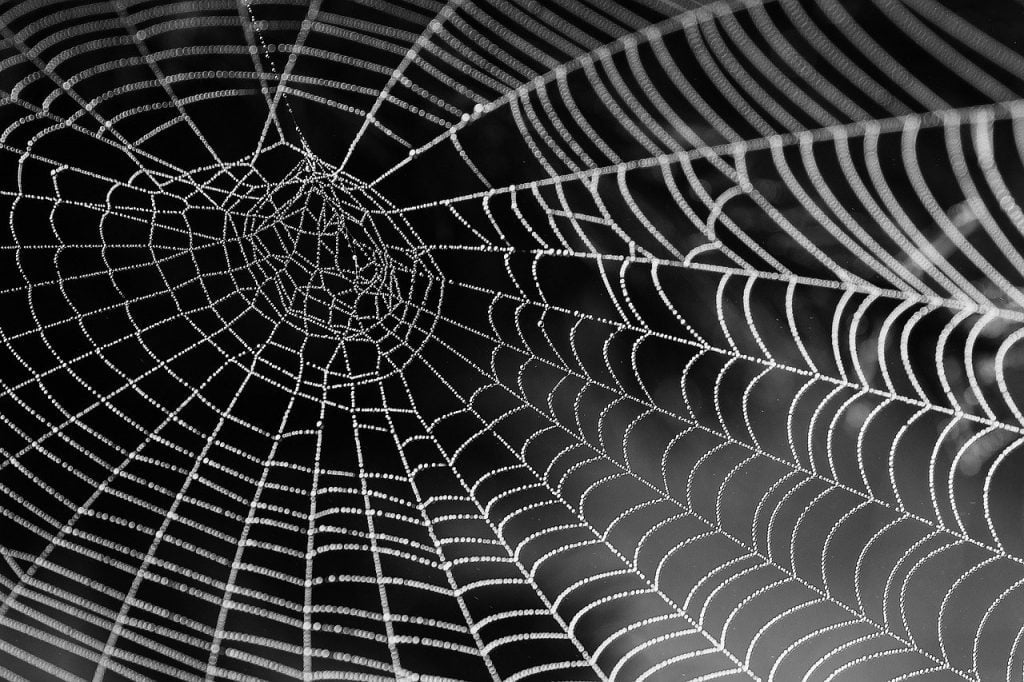 How they got their name

The story about how camel spiders landed their name is not yet known. The myths that go around portray these creatures as attacking camels, eating their flesh, laying eggs on their belly skin, etc.

Even though they’re not exactly ‘spiders’, they bear a very close resemblance to spiders and this might be the reason why they are called Camel ‘spiders’.

The fact circulating about camel spider lay their eggs on wounds they create on human beings or camel bellies are very wrong.

Once it is breeding season, male spiders chase females in order to mate. When the mating is finished, the female spider will go hunting for food. Female camel spiders, once impregnated, hunt much more than usual and stores the food in their body. After 11 days (the gestation period), the female will dig a burrow in the sand to lay eggs.

Speed and the Sound they make

It is highly unlikely that camel spiders can move as fast as 25 miles per hour. They do move fast, but the above-stated number is just another exaggeration. They can move at a speed of 10 miles per hour.

Camel Spiders do not make webs like normal spiders and wait for their prey. Camel Spiders are hunters and hence they have the ability to run quite fast. Luckily, they aren’t fast enough to keep up with human beings and scare them. They are only one-fifth fast as a rabbit.  Most people can outrun a camel spider as its highest speed is only about ten mph.

Another fact that accompanies the rumor about their swift movement, is about how they make loud, screaming sounds. This fact is also fabricated. The only noise they make is when threatened; then, they make hissing voices to scare off the enemy.

The sound they make is not screaming, instead, it is produced by rubbing two body parts; a process called ‘stridulation’.

Camel spiders are said to be able to jump as high as 5-6 ft and feast on humans, both of which are fabricated claims. They are carnivorous, but they don’t eat human beings. They eat lizards, beetles, small birds, termites, etc. They use their jaw-like structures to catch the prey and then generate a digestive juice that allows easier consumption.

The spider babies, also known as spiderlings usually hunt small insects. They go for larger prey as they grow up. An adult camel spider can hunt preys that are bigger than it in size.

They seem to follow humans at times, but it is for the purpose of staying in the shade. Maybe this is what made people think of these creatures as carnivorous. They aren’t found around humans that often because they are nocturnal by nature. They hunt mostly at night when the desert is comparatively cooler.

Camel spiders do bite, but it is a self-defense mechanism; which means that they bite only when they feel threatened. The bite of a camel spider is very painful and might need medical assistance. But it is no reason to panic.

Because, contrary to popular belief, Camel Spider bites are not venomous and definitely not fatal. One should be, however, sure to seek medical assistance so that the chances of the bite turning into an infection can be lowered. Their bite does not make a person unconscious and they certainly do not eat human flesh after making them pass out.

Their digestive fluids are released when they bite, which liquefies the prey’s meat to make consumption easier. This is why their bites are incredibly painful; because it liquefies your flesh.

The images that circulated on the internet in the early 2000s were as responsible as the fake information in planting an irrational fear in people about camel spiders. After examining these images, we can see that most of them are taken from an angle that’s really close to the creature. The camera angles were carefully devised to make the spiders look bigger than they actually are.

The camera angles worked well to give the illusion that the spiders were large and threatening.

They are not as large as the pictures make them out to be, they are not as big as a frisbee. There are more than 1100 varieties of camel spiders and their size can vary for different types.

Generally, they can be 3-6 inches long, 6 inches is the biggest number of their size chart yet recorded.

Should we be scared of Camel Spiders?

No, there’s no reason to be scared of these creatures. They do not bother to attack humans unless we disturb or attack them first. Their bites are not poisonous even though they’re very painful.

That being said, there’s no excuse for spreading false information amongst people and generating an unwanted and unhealthy fear about a creature that doesn’t want to hurt human beings.

Unfortunately, many facts about camel spiders remain unknown to us, such as why it is not found in Australia and Antarctica. While its absence of Antarctica can be understood in reference to its extremely cold weather, its absence in Australia doesn’t seem to make sense. Camel Spiders do not survive under lab conditions of captivity and so, we haven’t been able to decode more about their nature.

How to Choose the Best Head Wig for you 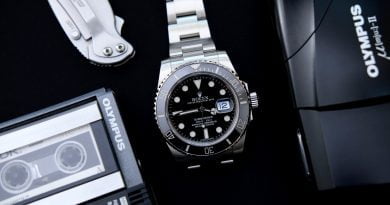