Top 10 Brands of Chips in the United States

Craving for some snacks? Why don’t we grab some chips? Yes. Chips! Who doesn’t love chips? Chips are one of the favorite snacks, if not by all, maybe by many of us. They are easy to buy since almost all groceries or convenience stores have them. We admit it or not, chips give us the salty pleasure that our body needs occasionally.

Chips have a lot of varieties that can match your taste. There can be your all-time favorite original flavor, spicy, sweet, extra cheesy, the usual potato chips, or “healthy” chips. As time goes by, a lot of development in terms of chips production had been made to cater to all the consumer’s preferred tastes.

There are many things to consider when choosing the best fries for any occasion. Perhaps the most important of these is taste. You can have the best French fries in front of you, but if the taste is not right, you will not like your sandwiches.

Potato chips, also known as chips or crisps, are thin slices of potato that have been deep-fried or baked until they are crisp and crunchy. They are usually seasoned with salt, and can also be flavored with other ingredients such as cheese, herbs, or spices.

They are a popular snack food, often served with dips or as part of a larger snack platter. Potato chips are generally high in fat, salt, and calories, so they should be eaten in moderation as part of a balanced diet.

In this article, we are listing down the top 10 brands of chips in the U.S. in terms of popularity, flavors, and overall impact. If you are thinking about what chips you want to buy from the store next to you, you may consider these brands.

Doritos of Frito-Lay seems to be a top favorite snack in the U.S. The famous brand launched its first flavor, Toasted Corn, in 1966. The product was a success, but consumers were expecting it to be spicy since it is packaged and introduced as Mexican Snack.

The next year, Doritos

Taco-Flavored chips had been out in the market. In 1972, the famous Nacho Cheese-flavored Doritos hit the market by storm. Over the years, the premier chip brand had produced a lot of varieties. Despite the developments, its crunchy, flavorful, and Mexican trademark of it was maintained, making it an all-time favorite of the Americans.

under the Frito-Lay Company. After 23 years, Cheetos Puffs was born as an additional variety of the brand. The two kinds of Cheetos have been an in-demand cheese snack for so many years until a new member of the family, Baked Cheetos, was introduced in 2004.

Cheetos are available for as low as 4 dollars 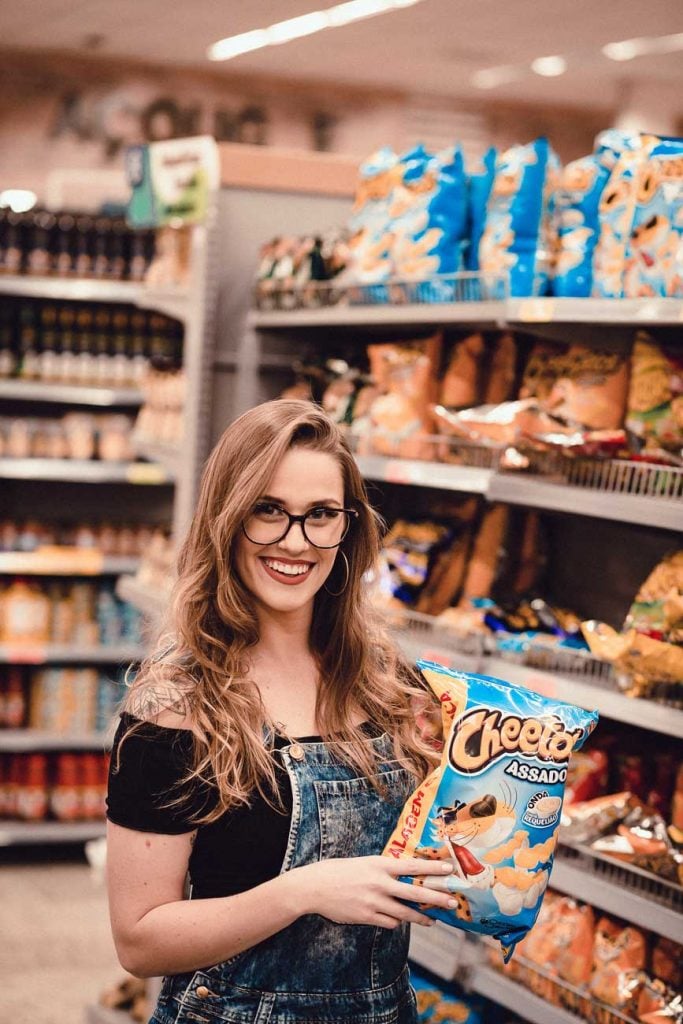 We have another Frito-Lay product on the list of favorites, the potato chips Ruffles. The name comes from the word “ruffled” which means “crinkle-cut.” As seen on its packaging and presentation, these crinkle-cut potato chips have ridges. The ridges are not only for visual purposes of the product, but it is to make the chips crunchier and sturdier. That is the reason why Ruffles is a good snack, especially on long travels.

Ruffles have many variations available worldwide, but some are seasonal, and some are only available in certain countries. The top flavors of the said brand are Sour Cream Onion and Ketchup.

Our next brand is very famous for its one-of-a-kind packaging of chips. Pringles are wheat and potato chips stacked in a cylindrical container, which makes it an ideal snack whenever you are on a picnic or on a trip. The well-known brand came to life in 1967 under Proctor and Gamble until 2012, when it was sold to Kellogg’s.

Just like other brands, Pringles have its own set of flavors. Did you know that in the U.S., only the original flavor is being sold until 1980? At present, the US has already stocks of different flavors including the original, sour cream and onion, salt and vinegar, cheddar cheese, barbecue, hot and spicy, ranch dressing, and loaded baked potato.

When we talk about potato chips, Lay’s will never be off the list. If one is to go to the grocery and proceed to the potato chips section, Lay’s would probably dominate the area, with its various flavors. With the huge success of the said brand, who would have thought that these chips were first sold from the back of a car?

Unknown to many consumers, it is said that in one bag of Lay’s, four to five potatoes are being used. This only means that these potato chips are indeed made from potatoes. Lay’s original flavor may be undisputed, but there are also a bunch of flavors that Americans can choose from.

As a matter of fact, there are flavors created for a specific region only. The first flavored Lay’s is barbecue. Some of the innovations of the brand are results from the open competitions by Lay’s every year. We are wondering, what could Lay’s offer to consumers in the next years to come.

Kettle Chips is a potato-chip brand that is tagged to be “healthier” than the other regular potato chips available in stores. It was assumed to be healthy since it tastes like a real potato. However, what makes Kettle Chips a standout is the manner in which it is prepared. Regular chips are said to be continuously fried, while Kettle Chips are processed via batch cooking. Interesting, right?

To cater to a wide scope of consumers, Kettle Chips has also its own flavors. Some of them are Salt and Fresh Ground Pepper, Backyard Barbecue, Organic Potato Chips, Jalapenos, and many more.

Munchos is another potato-chips pride of Frito-Lay. The brand is made from dried potatoes. For salty chip lovers, this brand may be a hit since according to some reviews we’ve read, Munchos have a much more obvious salty texture than other potato chips.

Munchos is also known for having a “transparent” chip, a thinner appearance than the other brands, and crispy chips. It may be advertised as a potato crisp, but it is said to taste like a corn chip. It is not surprising to have that taste since one of its ingredients is enriched cornmeal.

If you love Tortilla chips with matching dips, Tostitas by Frito-Lay is the one for you. It was nationally distributed in 1980, with its round chips and Mexican taste in the flavors of Tostitos Traditional Flavor and Tostitos Nacho Cheese Flavor. These introductory products made record-breaking sales in Frito-Lay’s history.

Popchips may be a little young in the food-chips industry but it does not mean that they cannot capture the tastes of the consumers. In 2007, a chip that is made of potato and corn came to life, under the partnership of Keith Belling and Patrick Turpin.

In its few years in the market, Popchips has earned several awards such as Best Crispy Snacks for Kids, Best Potato Chip, Best Chips Under 100 Calories, Best Low-Calorie Snack, and #1 Potato Chip.

Popchips are said to be one of the “healthy” snacks. A healthy snack does not have to be boring, so the company had also come up with several varieties to choose from. For their potato chips, Popchips have Sour Cream and Onion, Cheddar, Barbeque, Salt and Pepper, Chile Lime, Ketchup, and Crazy hot flavors to name a few. The brand has a Tortilla variety, including the flavors Nacho Cheese, Ranch, Chili Limon, and Salsa. Lastly, it has Corn Chips as well, in the flavor of Katy’s Kettle Corn.

Looking for a “greener” snack? You may want to try Utz Potato Chips. It is proclaimed on the Utz Quality Food Official Website that these chips have undergone minimal process “to bring out the natural flavor of farm-grown potatoes.” The company claims that the process starts with freshly picking the potatoes from the farm, then using clean and simple ingredients in the next stages.

According to some published reviews, the Utz chips are light, flavorful, and crunchy. Even if the chips look thin and light, it is said to be sturdy enough. These chips can be eaten with a dip as well, but “tasters” say that Utz is a very good snack, with or without dip. Aside from its original flavor, it also comes with other varieties such as crab, red hot, original no salt added, barbeque, salt and vinegar, sour cream and onion, and many more.

We know that after reading our list, you are now in a hurry to get some of these flavorful snacks. Let us remind you how “healthy” chips may be or how flavorful they can be, we should know how to take them in moderation. Remember the cliché, “All excess is bad.”

What are the top chips brand in America?

There are many brands of potato chips that are popular in the United States. Some of the top brands include:

Does the US make any chips?

These companies produce a wide variety of potato chip flavors, including classic flavors like Original, BBQ, and Sour Cream & Onion, as well as more unique flavors like Cheddar & Sour Cream and Kettle Cooked. In addition to these national brands, there are also many smaller, regional brands that produce potato chips and other snack foods in the United States.

What are the top 5 hottest chips?

What is the number 1 selling chips?

Lay’s is generally considered to be one of the top-selling brands of potato chips in the world. Lay’s is owned by the Frito-Lay company, which is a subsidiary of PepsiCo and is known for its wide variety of flavors, including classic flavors like Original and BBQ, as well as more unique flavors like Cheddar & Sour Cream and Kettle Cooked.

Lay’s chips are available in many countries around the world and are known for their high quality and great taste.

Sports and physical activities play an important role in the development of children. Not only do they promote physical health and fitness, but they also foster teamwork, discipline, and self-confidence. There are countless sport activities Read more…